On the 18th of July, the annual World Listening Day, Smolicki facilitated a performative soundwalk in Stockholm. The soundwalk responded to this year’s theme which was “listening to the ground”. As the World Listening Project’s website explains, the inspiration for the theme came from the work of Pauline Oliveros (1932-2016), a sound artist and scholar known for her concept of deep listening.

“Sometimes we walk on the ground, sometimes on sidewalks or asphalt, or other surfaces. Can we find ground to walk on and can we listen for the sound or sounds of ground? Are we losing ground? Can we find new ground by listening for it?”

The walk began at the bus terminal in the central part of Stockholm and led towards Kungsholmen, one of Stockholm’s islands, exceptionally quiet and rather unattended in the summer. About 15 people took part. The itinerary was planned earlier and Smolicki’s intention was to lead the sound-walkers through sections of the area characterized by diverse altitudes and surfaces. After leaving the terminal participants crossed the bridge and walked up the staircase leading to a little hill where the city archive is located. The group continued slowly walking on the grass between boxes of an urban garden organized between the blocks of apartments nearby. After taking the elavator down into the subway station, they continued strolling through an empty tunnel carved in a rock on top of which they had just been walking a couple of minutes before. While crossing the tunnel Smolicki initiated the first out of four pre-composed pieces that participants had been instructed to activate via their mobile phones. Each phone functioned as a speaker broadcasting a random track from a multi-channel composition distributed through a router carried by Smolicki in his backpack along the walk. Additionally, he had a wireless speaker attached to him which enabled a live, improvisatory mixing of the pre-organized material. The composition in the tunnel consisted of field recordings of Smolicki walking on diverse surfaces which he had made in last several years. Soon the group’s own steps mixed with the recordings of walking on ice, snow, gravel, leaf litter and wooden planks of a pier. Next stops with similar interventions included a wooden, squeaky pier by the water, a calm, little graveyard surrounding the local church and an open vantage point overlooking the city, located at the back of the city archive which the groupd returned to towards the end of the walk. There, participants performed a distributed composition based on the fragments of Pauline Oliveros’ composition entitled ‘Silence’ performed originally by her in 2010 (the original recordings can be found here ) 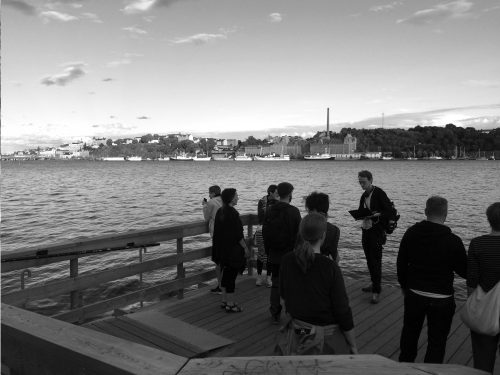