“One of the few spaces, reservoirs of memory for Diasporic subjects, is the archive” – John Akomfrah 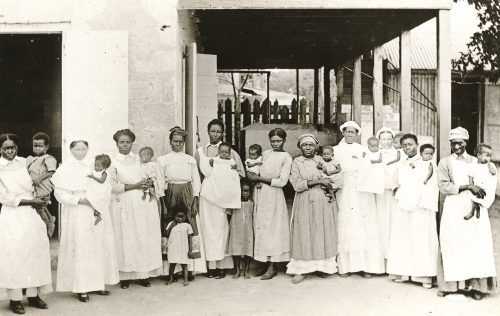 Close Contact comprises a suite of collaborative projects and interventions bridging technology, performance, and colonial archives. These are detailed below:

Bitter & Sweet is a mixed reality experience that combines Augmented Reality (AR) software on iOS handheld devices, onsite media projection, performance, and other traditional curatorial strategies, in order to stage subtle encounters (contact points) with hidden or unnoticed colonial memories in public space. The particular site of focus is the Royal Cast Collection of the National Gallery of Denmark, which has been housed since 1984 in the West India Warehouse (Vestindisk Pakhus) along Copenhagen harbour. Built in the 18th century, the warehouse stored goods traded during the transatlantic slave trade, such as rum, sugar, coffee, and tobacco. Concurrently the cast collection, which was created in the 19th century tradition of classical instruction, comprises white plaster casts of Western classical subjects, depicting ideals about the human body from antiquity to the Renaissance.

Formal mainstream discussion about colonial history in Denmark is surrounded by an atmosphere of discomfort. Only specialists have the full historical overview, and even then more complex discussions about cultural legacies, racism and other socio-economic consequences are generally absent from pedagogy and museum interpretations. It is sensitive terrain, but this does provide opportunities to rethink how people might access this past in ways that are empathetic and also relevant to contemporary migration and identity politics.

The Bitter & sweet experience is comprised of contact points – both inside and close to the West India Warehouse in Copenhagen – which activate archival relationships with fragments of sound and image not ordinarily experienced at the site. A prototype version was tested at a public event we hosted onsite on 28 Feb 2016, which featured five points and an improvised action. This event was an accelerated response enacted due to changing institutional circumstances. It took place on the day the Cast collection and building permanently closed to the public. We are revising our original plans to respond to this shifting terrain, and are developing the equivalent of a virtual haunting using GPS triggered contact points that could have a life beyond (and in spite of) changes at this critical site of memory.

Finding Alberta is an augmented reality city walk tracing the vanishing archive of Alberta Viola Roberts (1901 – 1917) in Copenhagen. In 1905, Alberta and another child named Victor Cornelins were taken from their respective families and brought together from the island of St. Croix to Denmark, in what has been described as an education experiment. However, when they arrived in Copenhagen, instead of beginning their proposed studies, they were included in a colonial exhibit at Tivoli Gardens – an amusement park that still exists in the centre of the city. Displayed in a cage as human curiosities, they were subjected to the negative racial attitudes held in Denmark at that time. Danish archives contain artefacts and records that scholars and journalists have used to reconstruct the children’s saga into an understandable narrative. Victor Cornelins’ celebrity has largely influenced this. He later became a teacher and survived until old age, giving regular media interviews about his experiences and eventually writing his own biography. However Alberta’s story is poignantly marked by silence. She died early at the age of sixteen, and the little we know of who she was (her personality) comes from looking at three photographs in which she is represented, and from reading Victor’s selective recollections.

This locative media intervention is therefore concerned with bringing Alberta closer to the surface of Copenhagen’s memory, by encouraging mobile device users to follow her minimal archival traces around the city, re-enacting her movement through space and making real and imaginary contact with her presence. Here the combined GPS and media integration possibilities provided by AR are being applied as tools for sensing and witnessing what came before, ultimately in an attempt to honour a historical individual denied adequate recognition in the past.

Outcomes:
This locative media app for mobile devices is tested in the autumn of 2017. Link to app soon to come.

This intervention for cultural heritage seeks to adopt an alternative approach for engaging the public with colonial histories by recording and installing unheard voices as alternative interpretive guides responding to colonial artefacts in the Royal Library’s commemorative exhibition in 2017, and from the main collection in the National Gallery of Denmark. This process will begin with a series of discursive workshops about the making, meaning and cataloguing of artefacts. These conversations, with diverse groups of people across age and culture, will then inform and support the recording of oral testimonies. These testimonies will then be edited into slices of sonic memory to be installed with corresponding artefacts in exhibition spaces. The overall aim is to make space for multi-vocality in museum and library settings by enabling people to speak to and be heard by the archive, whilst at the same time helping to interpret challenging colonial materials. In this way an opportunity is created for institutions and the general public to better understand the affective legacies of colonialism in the present day.

Outcomes:
Discursive workshops, sound recordings and installations at the Royal Library and Statens Museum for Kunst.

This is a context-specific artistic residency hosted by Botkyrka Konsthall. Artists reside in an apartment based in the Fittja neighbourhood of Botkyrka municipality. They develop interventions within the apartment and also for exhibitions in the gallery space in Tumba. As part of the New Biennial for Art and Architecture, themed Transitions/ Övergångar, Temi Odumosu’s residency will embark on a process of archival excavation to find traces of diverse cultural memories, presences and systems of knowledge in the Botkyrka region. In addition to conducting both traditional and intuitive research, Temi will create material moments (or contact points) in public spaces, where the outcomes of her findings are exhibited in mixed media. The overall idea is very simple: to prototype methods for expanding cultural awareness, whilst at the same time seeking to create links of empathetic connection between people and communities. She asks: How can we attend to the past whilst honouring the needs of the present? Can archives be used creatively to share identity, meaning and experience across varying landscapes (urban spaces, villages, forests, the sea)?