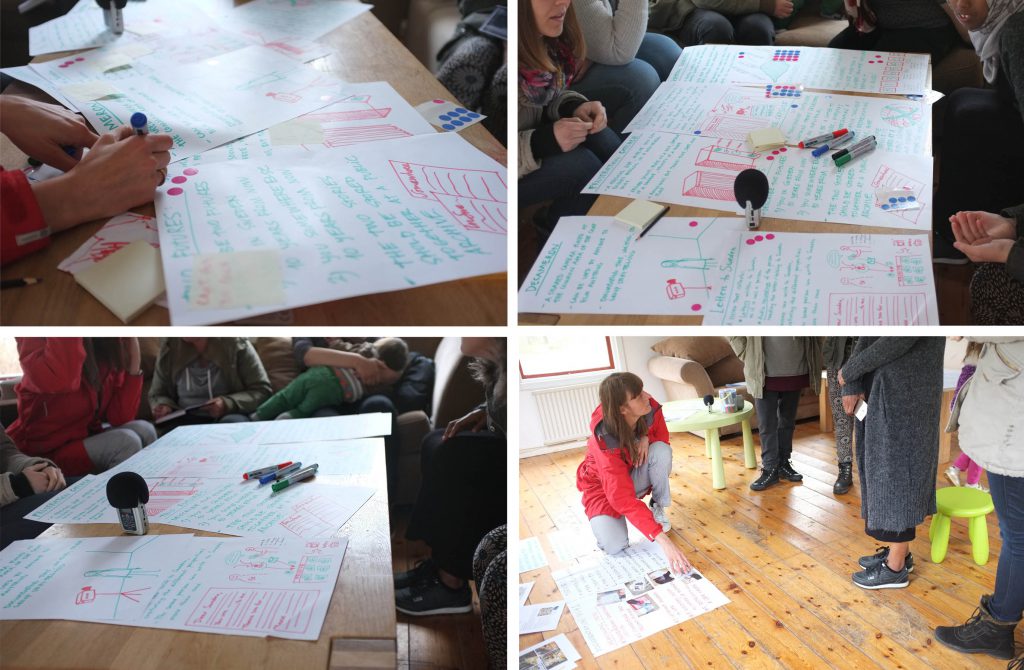 Evaluation of co-archiving concept ideas in collaboration with users (CC:BY-NC).

As argued by Jaques Derrida (1995*, p. 4): “There is no political power without control of the archive, if not memory. Effective democratization can always be measured by this essential criterion: the participation in and access to the archive, its constitution, and its interpretation”.

This statement serves as a starting point for a series of research interventions exploring and prototyping co-archiving practices aimed at involving underrepresented voices in contributing to our common archives, and in documenting the story of our times from their point of view. How to give voice to the marginal? How to create conditions for accessing records of human existence beyond traditional methods? How to support co-archivists that strive to seriously engage the subjects (the “archived”) in the shaping of the archives?

The Co-archiving theme has evolved from research activities conducted in the Urban Archiving research theme in Living Archives. Our attention was then directed towards underrepresented, marginalised urban communities and neighbourhoods. The group focused on in the Co-archiving theme is refugees seeking asylum in Sweden.

Our research approach is design research, which is based in action research and often driven by a critical agenda. Principles and methods from the fields of participatory design (PD) are applied implying that prototyping and design interventions are part of the research process. The direct involvement of the users is one of the central principles of PD. Instead of designing for the users, the designers and/or researchers work with the users in a collaborative (co-) design process of joint decision-making, mutual learning and co-creation.

May 2018: The Co-archiving Toolbox published as open source on Instructables.

April 12–13 2018: Paper presentation: “Re-thinking archiving for increased diversity – Insights from a co-design project with museum professionals and refugees” at the Cumulus 2018 Conference in Paris, France.

November 2017–April 2018: The Co-archiving Toolbox tested in the field.

December 2016 – ongoing: The Co-archiving Refugee Documentation project, read more about the design workshops, and outcome up to now.

June 1 2017: Paper presentation: “Becoming a co-archivist. ReDoing archival practices for democratising the access to and participation in archives” presented at the Cumulus 2017 Conference in Kolding, Denmark.

November 3–4 2015: Memory Gaming at the AHA festival
As part of our participation in the “Re-enactments – Archival Performances” at the AHA Festival the Memory Game was played. At the first gaming session the source was archival traces from the AHA festival 2014 archive. At the second gaming session (18 hours later) the players re-enact and share their memories and experiences from taking part in the archival performance during the last 22 hours. Read more.

October 8–10 2015: The Memory Game travels to Rochester (US)
The Memory Game is a card game (a remake of the classical Memory game) and an archiving practice designed to work as a platform for dialogue, and a framework for collecting, storing and sharing memories and cultural heritage. The gameplay is an act of collective storytelling, and an associative play between the players and the memories performed and re-enacted. As part of our collaboration with Rochester Institute of Technology (RIT) the game is played and exhibited at the MU/RIT Partnership Symposium.